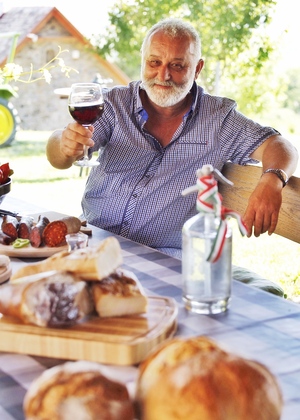 We were cementing the village road some 15 years ago on local government request when the mayor, János Kovács, called me away saying he wanted to show me something. He took me up the mountain with the obvious intention of selling me a lot producing grapes and then I would do up the local roads myself.

We started out but I did not really like the lot at the bottom of the hill. He just kept insisting that I should follow him. We reached the hill where the belfry now stands. I went to the edge, looked around, and forgot instantly about all the tension of that day’s work.

It was a decisive moment as it led me to the path resulting in the Öreghegy apartments and farm.

I kept buying one lot after the other according to my financial possibilities. First I just bought a lot producing grapes, then I would have liked to have a couple of animals to be able to evoke the most important components of country life: the chiming of the bells, the animals, the people with frankness in their eyes and thus recall my childhood years, my roots.

The brief history of Vindornyalak

The settlement was first mentioned in 1358: Vinqurna, in 1558: Wyndurna Lak. It got its name from the former Lak, that is mansion house built at the Vindornya-brook. It was the property of the Hertelendy family from the 15th century, although lesser aristocratic families appeared as squires in the 16th century. It became a village of entirely aristocratic property by the 18th century, and the grand aristocratic Festetics family acquired it at the end of the century.

The biggest „treasure” of the small settlement is the Hertelendy chateau. The Hertelendy family was based in Zala county. The church of Lak village was built around 1780, and transformed by bishop Gáspár Hertelendy in a Classicist style.

There is an excellent view on the Vindornya-basin and the Zala hills below from the southern side of Kovácsi hill, from the ravenstone rock rising above the settlement. The Kovácsi Mountain Settlement, as a wine-producing region, is part of the grape mountain and is famous for the wine produced here. The settlement is part of the Balaton resort area of emphasized touristic importance.

The Hungarian racka sheep (formerly known as the racka sheep of Hortobágy) is an ancient Hungarian kind of sheep, according to certain theories the companion of the Hungarians since the conquest of the fatherland. It has been the dominant animal of Hungarian shepards on the Big Hungarian Plain, currently, however, it does not reach 5% of the total stock of Hungarian sheep population, not even together with the other traditional species like tsigai and cikta.

Its unique feature is the straight, V- and spiral-shaped horn, probably due to mutation and spread as a result of selection, but possibly arrived from the south, with the mediation of the Turks. The wool of the racka is not valuable, but its fur is, providing for the well-known sheepskin coat the shepards use. 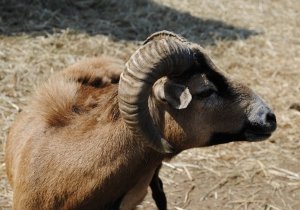 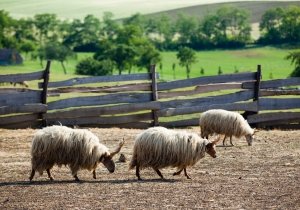 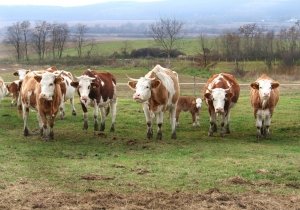 The guinea fowl is our only traditional domestic poultry that originates from Africa. According to research, the guinea fowl is of monophyletic origin, its wild ancestor is the helmeted guineafowl living south of the Sahara. The domesticated version hardly differs from its wild counterpart. The guinea fowl was already here in 13th-century Hungary, it was kept as a pet bird especially in the animal parks of cloisters and aristocratic palaces. It spread on peasant farms at the end of the 19th century, especially between the Duna and the Tisza and in the Transtisza region. 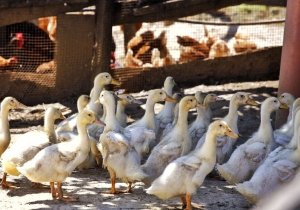 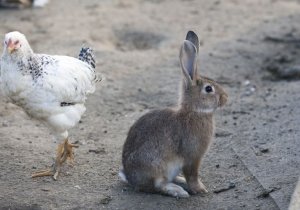 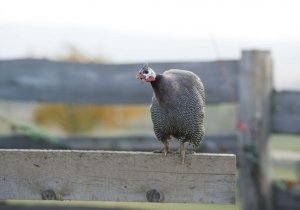 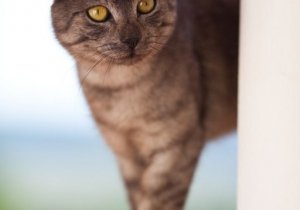 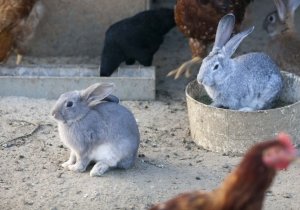 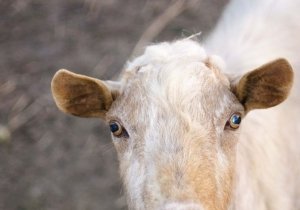 The mangalica fatty pig is the only endemic Hungarian species of pig. The species originated in the 1800s. Palatine Joseph von Habsburg visited the Topchider estate of Serbian prince Nicholas, where he received 10 sows and 2 boars from the fatty Knaz-Milos line of the Serbian Sumadia pig. Palatine Joseph made good use of these animals on his estate in Kisjenő to interbreed them with the Salonta and Bakony lot. This was so successful, that the characteristic Hungarian was already established by the 1840s: this was the mangalica, the pig that had almost complete exclusivity in the region and in the village.

Three were three known colour variations to the species: blond, black and swallow-bellied, while the red Szalonta pig turned into the red mangalica slowly during the 20th century. The blond mangalica is in majority, the black is already extinct by now, and the swallow-bellied and red species only differ from the blond in their colour. 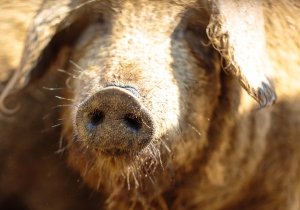 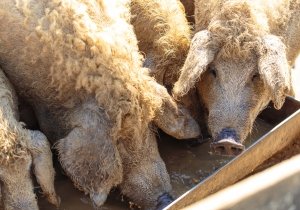 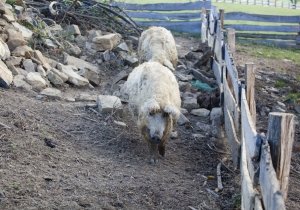 Fifi is the Hungarian vizsla dog. Kajla is always moving and adorable! Just like Berci, the obedient and humble German vizsla.

The vizsla is an old Hungarian hound, the result of the interbreeding of several species. Our ancestors, when conquering the fatherland, being passionate hunters, already discovered a hound that was following them during their migration into the Carpathian basin. It was yellowish, perhaps brownish, eventually spotted, and helped the hunter at every stage of the hunt. This foxhound, already extinct by now, was the ancestor of today’s Hungarian vizsla. Its earliest representation can be found in the Codex Albensis, made between 1100 and 1200, but the image of the foxhound looking for small hunt appears in the Hungarian Illuminated Chronicle too. Four, well recognisable vizslas can be seen on the picture representing the myth of Hunor and Magor, two Hungarian forefathers meeting the wonder deer. 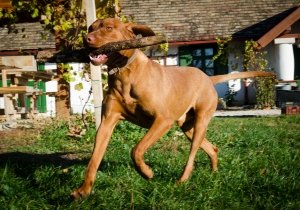 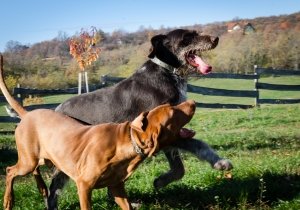 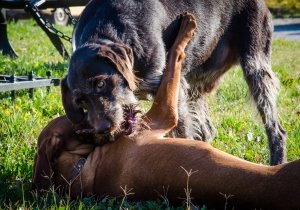 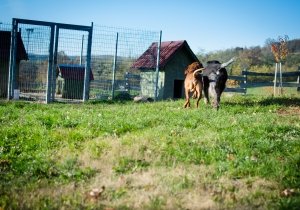 Elegant appearance, graceful body and harmonious moves characterize the Hungarian vizsla. Its physique is lean and reflects the harmony of beauty and force.

The German wirehaired pointer is one of the most well-known German hounds around the world. There are descriptions of German pointers way back from the 17th century, but this breed came about at the end of the 19th. It was at that time that breeds were selected according to hair variations. As feudalism was crumbling at the beginning of the 1800s in Germany, all the more larger lots became public property, though they used to belong to nobility.

Othello is one of the main grape varieties of national wines, and there are also several dishes made of it: we either cook them in a soup, or serve it as gravy to accompany meat, or as a special taste in the salad or jam, we might make jam of it, or cakes. Its typical taste is unforgettable.

The Celts already grew grapes on the territory of Hungary, but local wine culture prospered especially when the Romans were here. In spite of our developed grape and wine culture, Othello grapes reached us relatively late, as this variety has an American origin: a certain Arnold crossed the Clinton and the blue trolling variety. It was introduced into our country after the vine pest of the 19th century.

You cannot buy the crops growing in the garden anywhere. The countryside, the excellent air and loving care echo in their taste, smell and colours. 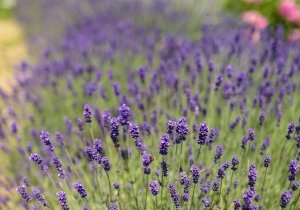 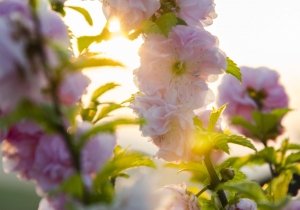 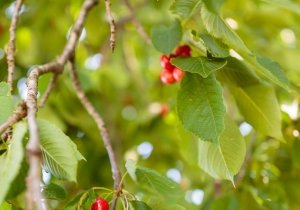 Our apartment houses
Apartments on the Öreghegy